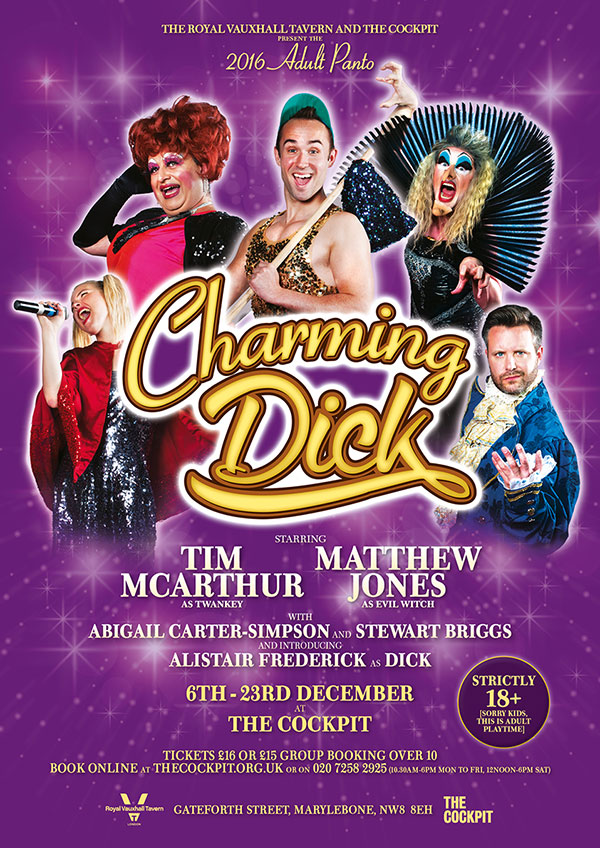 The smash hit 2015 adult panto; Charming Dick returns for one more outing in December at The Cockpit in Marylebone – Oh yes it does! So you have another chance now to enjoy some very rude (yet hilariously enjoyable) capers, if you missed it the first time.

‘Charming Dick is a feel-good festive slice of romance, innuendo and twisted dark humour. A must see!’ QX Magazine

Come and cheer for Dick, wannabe entrepreneur and dreamer, who has come to London to seek fame, fortune and the big time, but instead ends up working in a launderette with his Aunt Twankey – a has been cabaret and west end star (well, who isn’t).

Hiss and boo at the Wicked Witch determined to get her evil hands on the launderette and turn poor Twankey (silent t) out in order to obtain the famed lamp, which confers immense powers to transform gay clubs into gold (or just gives a very good light).

Sing-along with Babe, the Eurovision wannabe superstar, as she plans her nuptials to Prince Charming.

But will Charming marry her, will Dick become the big bar promoter he wants to be, will Twankey lose the launderette and how far is the wicked witch prepared to go to get her evil hands on the lamp. Will Charming and Dick ever build that snowman together? And why is Red Riding Hood in this panto?

Another rip-roaring adult panto from the RVT filled with panto classics, hissing, booing and enough songs and dance to make Eurovision look positively dull, all bought up to date for all you big dirty kids aged 18 and over and featuring some of our favourite drag artists. Book now!

‘a panto that totally enthralled an audience that were loving every minute of it. This is a show with a huge feel-good quality to it. Pure Pantomine perfection does not come much better than this’ – Gayabouttown

‘The physical comedy is superb and the innuendos have the crowd in fits as interactive cheering sees a room full of people shouting “we love Dick!” to the protagonist. I challenge even the most humourless of prudes to go along and not crack a smile’ – The Weekender